Nicodemus, My Sweet Kat, I Admire You

It was an exciting weekend, starting with a Grade 3 Stakes at Aqueduct, The Toboggan. Kendrick Carmouche was riding Nicodemus for the first time. We told him that Nicodemus can’t be allowed to dawdle in the gate. We might not want the lead but we didn’t want to be far behind. So, when they broke from the gate, Nicodemus seemed to get out well, but after a few strides, Kendrick had to take him back to stay out of trouble when another horse cut off his path. We thought the race was over… but Kendrick and Nicodemus didn’t agree. He was last, but by the time they reached the stretch turn, Kendrick was circling 5 wide and they were trying to get to the leaders.

Nicodemus is not known for having “late foot.” Horses with late foot can be last during the early part of the race but they are able to find another gear that has them passing horses quickly. Nicodemus is a grinder. Yet, this day, he was grinding his way past the rest of the field.

We were all cheering and imploring Kendrick to get him there before the wire. Another horse, Sunny Ridge, came up on his outside, while he was getting to American Anthem and the leader, Mind Control, a Grade 1 winner. Could he do it? As they reached the wire together, he reached out as far as he could. This is what happened…

The yellow line is the finish line. As you can see, Mind Control had a fraction of a nostril over the line and Nicodemus was on the line, with Sunny Ridge another nose back. WOW! What a finish.They call that a “bad beat!” It sure was for us and Sunny Ridge. Plus Nicodemus came up lame, so we’ll have to see where that takes us.

The next day, My Sweet Kat took the lead in a Maiden Claiming race and almost held on but lost by a neck to come in second. I Admire You is scheduled to be entered for a low level claiming race on Saturday at Turfway in Kentucky.

Hold Me Down had her first baby, a magnificent looking colt sired by Tapizar… 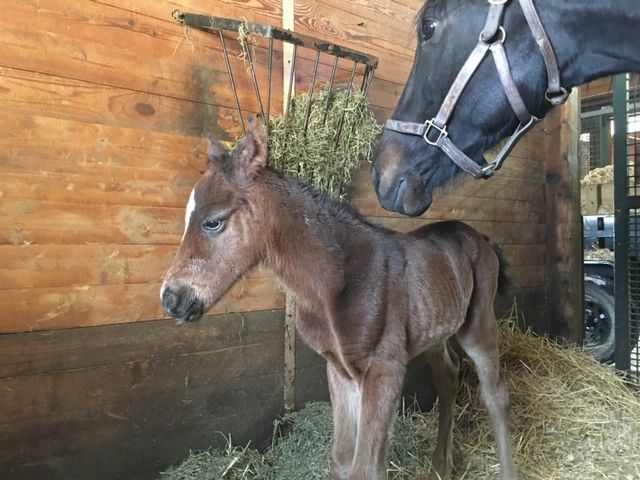 More to come on all fronts.