Queen of the Stable 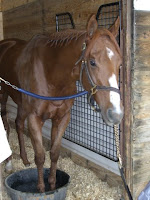 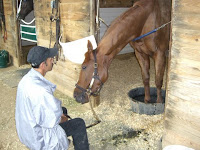 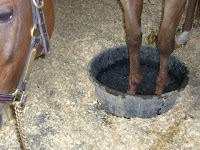 Here are photos of Ahvee’s Destiny with her feet in ice in Philadelphia. She’s been seen by Ian McKinley, the hoof specialist who worked on Big Brown before the Kentucky Derby in 2008. We’ve been expecting an abscess to appear and are soaking her feet in Epsom salts trying to accelerate the process.

Once that happens, she can heal rapidly. It’s been frustrating and it doesn’t look like she’s going to make it to Kentucky for that Grade 3 Stakes on October 10th. Next chance is a race in KY for a $100K purse or the Meadowlands in NJ for $60K. Both are on the 16th of October.

The two yearlings have gone to Pat Hoppel’s farm in Florida for training and will be prepared to be sold in April unless wither or both gives us reason to want to race them ourselves.

Hear the Footsteps is back in training at Belmont. Holy Blitzer is under tack at Clyde Rice’s farm. The other three are recovering in Florida and will go back in training between October 15th and early December.

Conseated Lady will aim for a New York State bred Maiden race, since she’s a NY bred. Arielle’s Song will start out in Florida (she’s a Florida bred). Katy’s Office Girl will likely remain in Florida until she’s ready for a grass race and will either start there or wait until the grass season begins in NY.

Have a nice weekend, Shabbat and Sukkot (yep, another Jewish holiday that goes through October 11th).

PS Sunday night sees the opening of the Carrie Fisher one-woman show we’re involved with, called Wishful Drinking. It’s happening at The Roundabout Theater at Studio 54. Eva Price, whose been overseeing the show since its US Tour in selected cities, says it’s even better than the show we saw during the Hartford run.