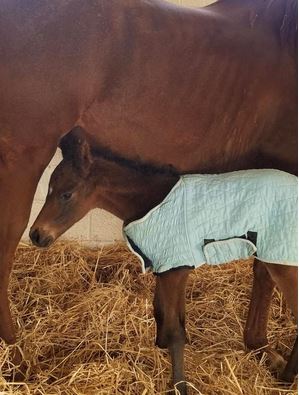 Ahvee’s Destiny 2019 is one cute filly, sired by Bernardini!

Ahvee’s Destiny has been slowly recovering from her sick hooves. She is still at Rood & Riddle hospital in Saratoga. They want to get the foal out of there, since they are concerned that any foal’s compromised immune system might be challenged by the sicknesses of their other patients. Since Ahvee still can’t run around a paddock, we are bringing in a Nurse Mare to take over the nursing duties and, if that works well, we will move the foal and the Nurse Mare to Bill’s farm.

Aside from being sad for both Ahvee and the foal because they are being separated so early, it will allow the foal to run around and develop stronger bones. Plus, we get the benefit of paying extra for the Nursing Mare and the foal in addition to paying for Ahvee’s Destiny. This may be the Sport of Kings. While I never made it to “King,” I can see how one can make it to pauper!

Nonetheless, we are excited that our girl is getting better and the new foal is charming.

One month after being TKO’d by Nicodemus, we went to the Breeder’s Cup in Louisville, KY. We saw friends like Larry & Jennifer, the entire Johnson clan, Tracey & Clay, Mark & Tammy, Richard & Donna, Lee & Kathie, Steve, Paul and probably some others I’m leaving out. Lee & Kathie and Richard & Donna each had a horse in the same Breeder’s Cup race. It was very exciting but neither horse finished in the top three.

Lee & Kathie also bred a horse who appeared in a different race with much the same result. Of course, that one, Gunmetal Gray, is hoping to get into the Kentucky Derby! Special thanks to Lee & Kathie for their allowing us to share their festivities. Much appreciated!

Right after Saturday’s races, we went to Lexington with Tracey and Clay for a lovely dinner and a visit with all our KY horses. It was lots of fun! Tracey & Clay look out for us and the horses in KY like the Johnson’s look out for us in NY. We really appreciate it. So lucky to work with so many good farm owners.

A week later, I fell off an exercise machine. I fell over backwards and got some whiplash in my neck and struck the lower back on a wood floor. At the time, aside from the trauma of falling over backwards, nothing much hurt. But within two weeks, what started off as lower back pain saw the pain extend to my glutes and hamstrings. At first I thought it was my statin drug side effect, since my dose had recently been doubled and I’d had muscle pain from statins in the past. Suffice it to say that it wasn’t a statin reaction. Rather, my fall had triggered spinal stenosis and spondylolisthesis in my lumbar spine. I am scheduled for a laminectomy and spinal fusion surgery at Mt. Sinai Hospital in NYC on March 6th. UGH!

At the race track, Nicodemus will be entered in a mile allowance race on February 21st. Let’s hope there are sufficient entries to make the race actually happen. If he does well, we are aiming for a stakes race on March 9th.

Tzipi may start soon, even though Linda feels she’s meant for grass racing. Mo Joy had a bad accident. She flipped over backwards in her stall and has a long fracture from her neck down her back. If she can heal properly, she might be able to race in late summer or Fall. Alphalfa is getting ready for turf (grass) racing in the Spring.

We half 11 1/2 broodmares, not including Ahvee’s Destiny. This year marks our first attempt to sell horses. Three 2-yr olds are scheduled to go into the ring, Love Code (Timonium May), My Aunt Mims (OBS April) and My Sweet Kat. Timonium May). The yearlings are led by Candy 2018 who is aiming for the Saratoga NY Bred Sale in August. The KY crew of 6 aims for Keeneland September. I guess it’s a bit scary, but it will be interesting.

Hope there’s some good news to share before my surgery. I miss hearing from you.