I wouldn’t get excited by a victory in a maiden claiming race. It doesn’t make a champion, which our dearly departed Sheila was. But somehow, Rexy was helped today by our Sheila, from on high. 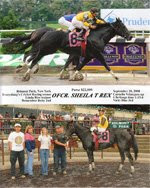 ready to go, a horse named Remember Betty broke through the gate. However, they re-loaded her. She was to be Ofcr. Sheila T Rex’s main (only real) competition. Here’s what the race chart writer wrote:

Ofcr. Sheila T Rex stalked the pacesetter for over five furlongs, was carried out to the middle of the track by that rival turning for home, hooked up in a battle that lasted the entire length of the stretch and prevailed at the wire.

I couldn’t have said it better myself. Rexy had to fight every inch of the way but she prevailed, most certainly with Sheila’s help.

Sheila, we will always love you and remember you as a champion marketer and a champion human being. Thanks for letting us call Rexy by your name!