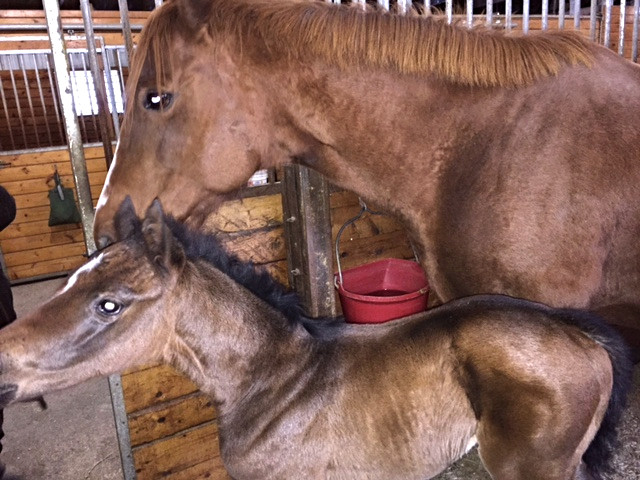 We left for Saratoga about 2PM and by 5PM we were at Rojan Farm to visit with Ahvee and her new foal.

We saw them in their stall. The foal was very snuggly and Ahvee’s Destiny gave us kisses to get carrots. 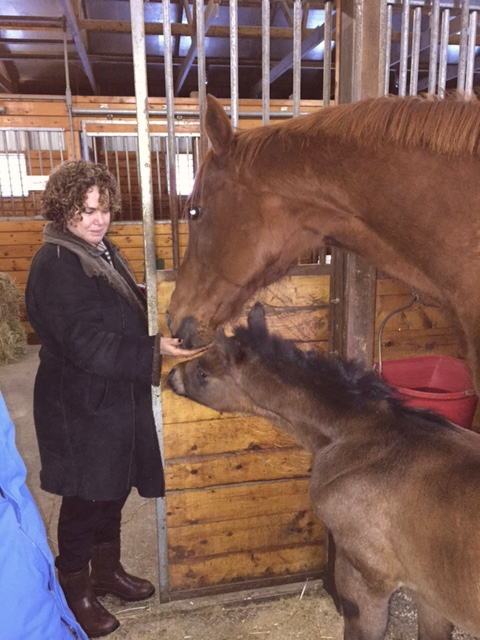 Then we went home to unpack and clean up for dinner. We dined with Mario and Dawn, neighbors who are also clients of Linda Rice. It was pleasant and tasty at Prime at Saratoga National.In the morning, we had a flood in the just finished basement because our frozen sewer pipe backed up when I took a shower. Still, we went to synagogue and got carrots for Ahvee and yogurt pops for Avi. Mike held down the fort while waiting for roto-rooter and a clean-up crew tried to get rid of the water and other lovely sewage. We ordered in for lunch while all this was going on. Under the circumstances, Mike and Amy were very good sports.

We rested for an hour and drove to Albany for a synagogue service… couldn’t get one in Saratoga. Then, we drove back to Saratoga for dinner, where we had a tasty dinner with Tom and Nancy at Wheatfields. I was surprised the food was so good. Good call, Tom!

We lost an hour Sunday morning at 2AM thanks to Daylight Savings Time and I got up at 5AM DST, so we could go to another service in Albany (It was my grandfather’s yahrtzeit — the anniversary of his passing). From there we left for Stamford and a brunch where our nephew David was honored.

Afterwards, home to open the mail and answer phone calls. We spoke with Linda about the 2-yr. olds in Florida and got a nice report. She believes that three of the fillies, FlatteryWillGetYou, Hay Field and Candy for Kisses may be ready to run in Saratoga this summer. Even Blitzer Too looked good and might be ready to run, if she stays in the barn, rather than get sold (right now, it looks like she will stay in the barn because she had a sharp breeze). Another Genius is on the bubble because she is very nervous. Ransom Note looked very good but is not training because of an issue with one of his hocks. He’s very large and may not run this year, depending on his maturity rate. All in all, a good review. And, oh yes, Linda even thought Little Ahvee was looking better.

Then, we changed and left for the JCC gala, where Eric, the JCC Director, arranged for the final service commemorating my grandfather’s passing. We bid on some items at the silent auction, partook of the canapes and followed that with a buffet dinner. Is it any wonder I’m not skinny!

I thought we were pretty active until I heard about the number of organizations for whom the various honorees contributed their time. It made me feel lazy!

Despite the fact that others may be even more active, I’m tired! So, if I fall asleep at the JFS Board meeting tonight, I hope they won’t feel too badly. Besides, I may not be the only one!Ahvee’s Destiny and the foal will be leaving shortly for her next “date” in Kentucky with City Zip, so we won’t see them for over 60 days. We’ll miss them, but look forward to their safe return by the end of May.

We have to decide if we’re going to sell any of the 2-yr. olds by early April. So, that’ll be when the next update takes place. In the meantime, we may send some additional photos of the little filly and her mom, when Skip Dickstein send us the photos he took.