The Kentucky Derby was very formful. The first four finishers were in exactly the same order as the odds the bettors made them. I missed Gunrunner, who was lower down on my list. Nyquist, the winner, is now a perfect 8 for 8. Preakness will run at Pimlico in Baltimore this Saturday. We’ll save our prognostications until later in the week.

It was a wild weekend with lots of rain on Friday, sun and almost 80 degree temperatures on Saturday and windy 40 degree temps on Sunday morning. Yet, it worked out great for us.

We met the Haskins at the house and the Byks joined us for dinner at Osteria Danny. It’s a new restaurant with a chef everyone loves. So dinner was tasty, filled with good stories and good friends… a great way to begin a wonderful weekend.

On Saturday morning, we sat on the patio watching the horses train, had some breakfast and then went to visit Another Genius and Candy for Kisses who were in Linda’s stable in Saratoga.

First, here is the view from inside the Saratoga house: 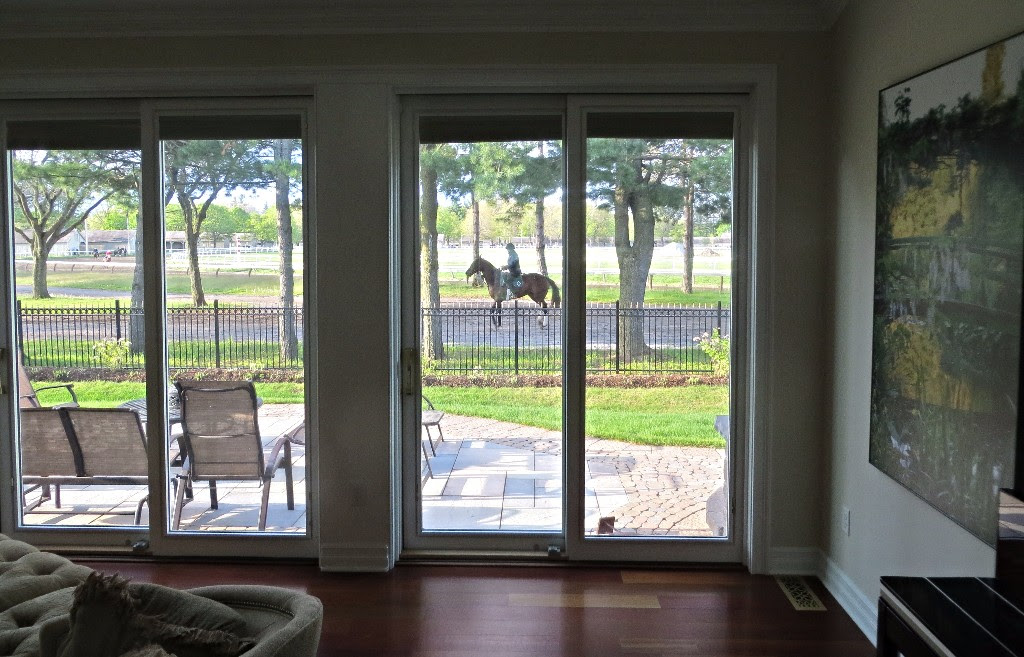 Here’s Samantha leading Another Genius past the back of the house: 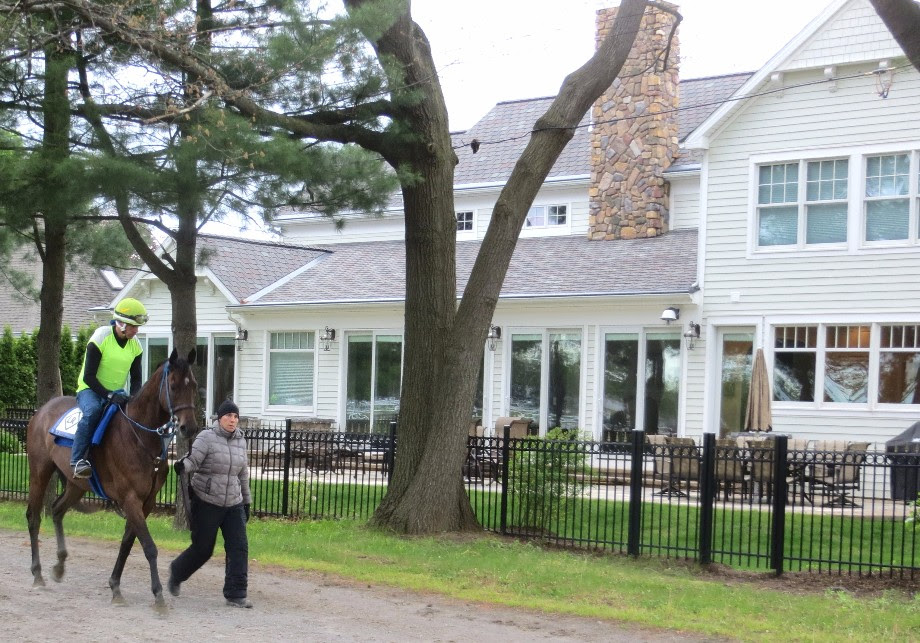 Here’s Candy for Kisses on the Oklahoma track:

Here’s the Genius on the track: 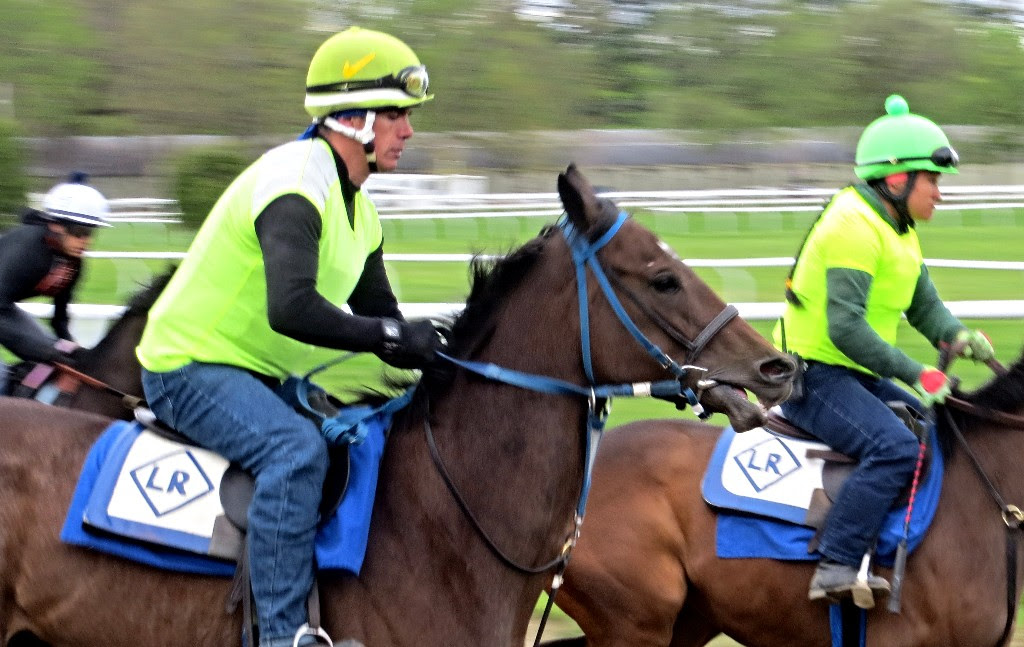 And here she is snuggling Rhoda: 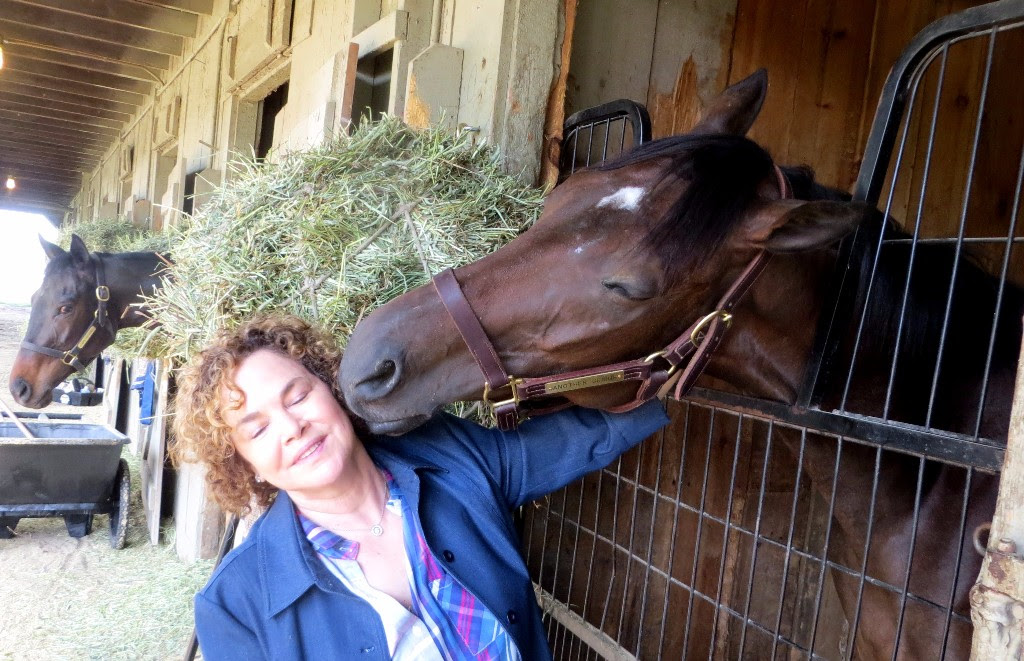 The next morning it was cold! 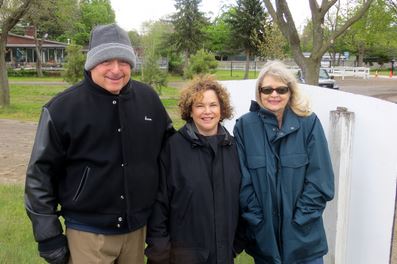 Saturday, however, was perfect for the Historic Home Tour run by the Saratoga Preservation Society. We were worried for a while because the first four or five homes were not special but the second half of the tour got better and better, finishing with Whitney Tower’s home near Skidmore and Gene Markey’s magnificent mansion overlooking the Saratoga Golf & Polo Club. Another nice meal at 15 Church and another wonderful Saratoga weekend!

In horsie news, FlatteryWillGetYou is pointing to The Bouwerie Stakes at Belmont on memorial Day, May 30th. It’s 7 furlongs on the dirt against NY Breds.

Ransom Note is doing much better at Dr. Hogan’s. Hay Field may be headed there too after a disappointing race at Finger Lakes. She’s sweet but does not seem to want to be a racehorse. So, we’ll turn her out for a while and if she still doesn’t want to participate, we’ll have to find a new home for her.

Allie N’ Kat will run soon at Finger Lakes. He’s just slow. Another Genius‘s future awaits a decision from Linda. Candy for Kisses is priming for Saratoga. Pointe Class should be coming to Belmont soon.

This reminds me about Kenny McPeek’s Rule of Five. If you have five horses, you should expect one to be sick, one to be injured, one who doesn’t want to participate, one who is just too slow and one who makes you forget about the other four!

Ahvee’s Destiny failed at her first attempt at getting in foal to Honor Code. So, last week they tried again. Let’s hope this one works! Ahvee’s first born, Ramon Dominguez, had some inflammation and remodeling in his knee, so he’s taking time off. Hopefully, he will go back in training this Fall. The other youngsters are fine. BTW, Ramon Dominguez, the jockey, has been elected to the Hall-of-Fame. Yay, Ramon!

Back soon with the Preakness outlook!