The Dow Jones climbed by over 900 points, Big Brown is injured and retired and we got to go to the Meadowlands Racetrack and spend time with Ahvee’s Destiny. It was an amazing day.

OK, so you can understand that stocks recovering in such a big way is amazing. Big Brown’s forced early retirement is sad. But what’s the big deal about seeing our horse? Well, we’d never been to a race track and experienced a race in quite this way.

First, we went to the Receiving barn. We’d done this at other tracks but here we spent an hour with our horsie. She was so calm, she began yawning (or maybe it was just my exciting presence!). She was very snuggly and we stroked her, kissed her and scratched behind her ears. Then, we watched as she was prepared to race.

Her hooves were scraped, so the dirt that was caught between the sides of her horse shoes came off. Uh oh, one of her shoes is loose. A job for the blacksmith when we take her to the Holding barn. Then, a tincture that looked like iodine was applied several times to harden the hoof. Her rear legs were wrapped in protective gauze. She was brushed down and looked beautiful. Then the bit, bridle, shank and other accoutrements were put on her. Finally, her blinkers were put on. They tried two different pair, choosing the ones that fit best.

Now it was time to start making our way to the Holding barn. Before we left she was sprayed with water to keep her cool. It was not particularly hot and she seemed annoyed at the spray.

The Holding barn was a few hundred yards away. Here all the participants in the 7th race are gathered together. Some walked around. Some stayed quiet in open stalls. Some came in with blankets on (most did not). A few minutes after the sixth race is over, we start making our way towards the paddock.

It turns out the holding barn is at the head of the stretch. So, we march down the stretch to the paddock, which in the Meadowlands, is in front of the grandstand/clubhouse, adjacent to the race track. Here, the horses are saddled and the patrons can watch the horses before the race begins. Our jockey is Chuck C. Lopez. He’s won twice riding Ahvee’s Destiny.

Okay, less than ten minutes to post time and we hear the call, “Riders up.” Samantha, the Assistant Trainer, boosts “C. C.” onto Ahvee’s back for a short parade around the walking ring and then onto the dirt track. I’m nervous as can be. Happily, Ahvee’s Destiny is not. 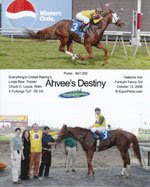 While the riders gallop their mounts around the track for pre-race warm-ups, I go to bet. For some reason, the trainers prefer to watch the races on TV (I like to see them with my binoculars outside in the fresh air). Nonetheless, we stay with the trainer and find seats in front of a big screen TV.

It’s post-time. The butterflys are flying (in my stomach, that is). Ahvee’s Destiny doesn’t get as fast a start as usual. However, “C.C. “ seems not to be pushing her. She falls back to fifth for a moment and, of course, I get worried. C.C. brings her up the rail, saving ground but will have to figure out how to get past the horses in front of him.

He sees an opening and takes it, going three wide into the stretch. For a few moments it looks like we’re not going anywhere and Weeks, a horse who finished in front of Ahvee in Philadelphia, is making a move along the inside. But then C.C. taps her with the whip to remind her it’s time to move… and she does. He keeps tapping and she gains on the leaders easily, goes past and wins by 1 ½ lengths. We are happy and excited. We wish C.C. had ridden her in Philadelphia, since that was a $200K purse and this was only $47K. Unfortunately, he committed to another mount and we wuz robbed by an inferior ride. 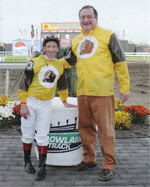 But this is no time to cry. I put on my silks and we rush to the Winner’s Circle. They take the photo and one more of me and C.C. together with our silks on. It’s a time to celebrate… and we will as we have a house full of guests for the Sukkot holiday.

What a great start to a week!