Will this be the end? 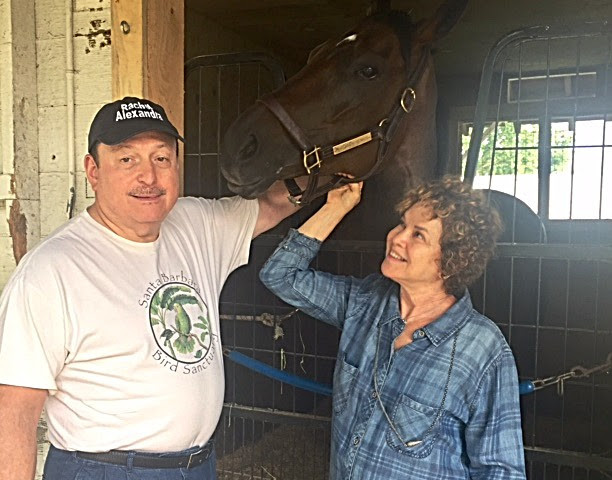 I apologize (even before the Jewish New Year is upon us). My blogs are generally more frequent. I like it that way and many of you like it that way. So, we’ll try to do that once again.

How has your summer been? The weather in Saratoga Springs has been generally wonderful. The time flies by. We’ve raced only once, though tomorrow Hay Field, who last time came in 4th on the last day of the Belmont meet at odds of 109-1, finds herself in the #1 post with 9 others on the grass during the maximum point of tomorrow’s eclipse. It’s a quick 5 1/2 furlongs and, though she is 15-1 on the morning line, I believe she can be competitive. Of course, “can be” and “will be” are not the same thing. 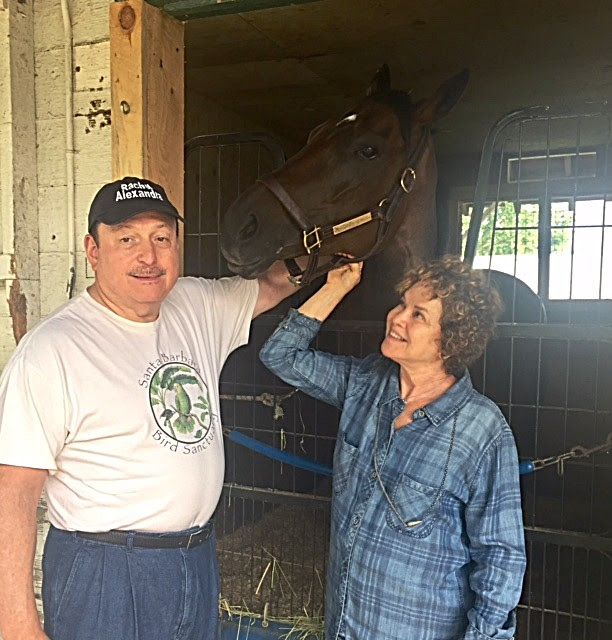 Us with Hay Field

Our trainer for this effort is once again, Assaf Ronen. The jockey is Luis Reyes who after finishing 4th on her at 109-1, won a race at Saratoga aboard Perplexed, a 115-1 shot. If you guessed that Perplexed‘s sire is Maimonides, you win 613 mitzvahs (good deeds).If you have no idea what I’m talking about, Google “Maimonides.”

Two weeks ago, Another Genius raced for the first time this year, with Linda Rice as trainer. It was also at 5 1/2 furlongs on the grass. In the paddock, she was calm, but on the track prior to going to the gate, she was unruly and used up a lot of energy. Jose Ortiz, the meet’s leading rider, got her out of the gate slowly. After pushing her up to 2nd for a moment, she settled back in 5th place and ran an even race, finishing 4th. Now Linda wants to bring her back in a $25K claimer on the last day of the meet. Ouch! 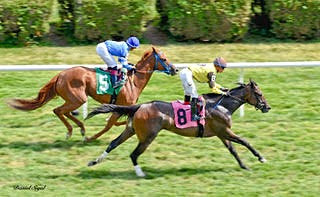 Looks like a win but it’s 4th place
Off the race track, we are having a love affair with our latest foal from Ahvee’s Destiny and Honor Code. He is the sweetest foal ever AND he has learned to eat whole cookies at the youngest age ever. Does that mean he’s a champ on the race course? We won’t know if that’s even a possibility for more than a year but we’re in love. 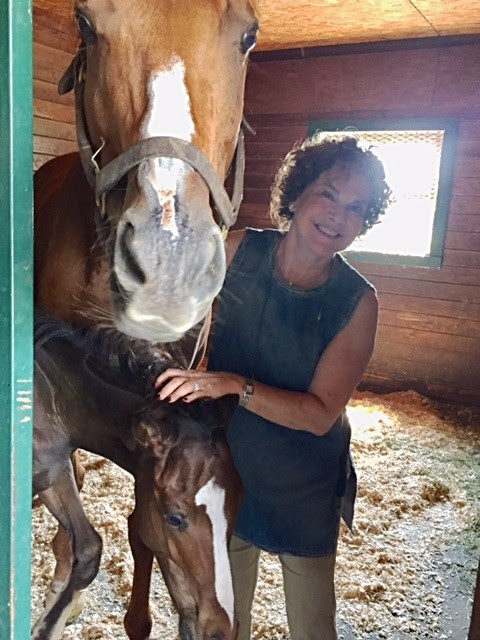 Look how sweet he is letting us handle him!
We had a fun and successful brunch to benefit the Permanently Disabled Jockey’s Fund. If you’d like to make a donation, feel free to send us a check, credit card, whatever!

We do get to see our steeds often this summer. Another Genius is at Linda’s which is not far but it’s simpler to see Hay Field and Beyondelle who’ve been across the street. Distance doesn’t stop us from seeing mom and baby, as well as Ransom Note, Candy for Kisses and FlatteryWillGetYou, who are all at Stonegate Stables in Ft. Edward about 25 minutes away. Candy is in foal to First Samurai, Flattery will be bred in February, as will Ahvee’s Destiny. Ransom is recovering from injury.

Candy for Kisses likes to graze

Beyondelle going to train. Our house at left.
Then, there’s Jose, our little Havanese dog. He attracts everybody. We have new friends because of Jose. Here’s a photograph by Daniel Sigal (see his website at DanielSigalEnamels.com).

That’s the man… all 15 lbs of him!
I hope to send an update after tomorrow’s race. Have a nice eclipse. Don’t look at it without glasses. We don’t have any… but we hope to be looking at Hay Field in the Winner’s Circle!