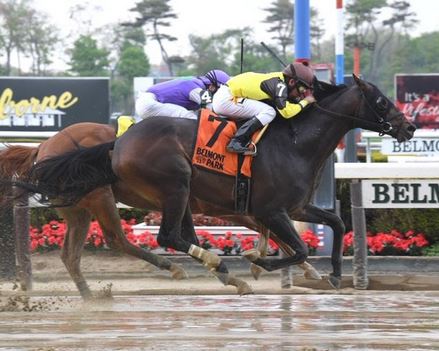 Nicodemus raced in The Westchester Stakes at Belmont Saturday

The highest level of races are known as Graded Stakes. The first level is Grade 3, then Grade 2 and then Grade 1. Yes, the Kentucky Derby is a Grade 1 race, as are the other classics. The Westchester was a Grade 3. Until now, FlatteryWillGetYou was our only entrant to run in a Grade 3. She did not win.

Nicodemus was not the favorite. He went off at 8-1 odds. The favorite was even money (1-1) and the second favorite, Stan the Man, was 3-1. Our jockey was Mike Luzzi, known as The Luz. He last rode Ahvee’s Destiny for us in a stakes race in 2008. He got Ahvee out of the gate quickly and by the time they reached the stretch, she was in perfect position to go for the lead… but, instead of signaling her with the crop that it was time to get into high gear, he just sat there, later saying he had “protected her” because she had nothing left. I felt like it was The Luz that had nothing left and had never used him as a jockey again.

Fast forward to 2017. I enter a charity golf tournament. Who is driving my cart and a partner in our team? Mike Luzzi. Turns out, he’s a great golfer and, even better, a great person. I even told him about my feelings regarding the race in 2008.

So, when I was unhappy with a jockey that Linda was using often on our horses, I suggested I’d rather see Mike Luzzi aboard than that guy. So, when all the best jocks found themselves in Kentucky last Saturday (What went on there, again?), Linda put The Luz on Nicodemus in The Westchester. I was happy to see him and thought about what a great story it would make if he won.

The horses all were in the gate for this mile race. Rhoda and Linda and I were very nervous. We had given “The Luz” instructions and when the horse broke from the gate, he followed the instructions to a tee. He got Nicky out of the gate fast, established position and settled into 4th place. Stan the Man was the leader and the favorite, Prince Lucky, was on his outside. On the far turn, Nicky moved into 3rd with Prince Lucky in 4th, while Stan the Man was on the lead alone. There were 3 or 4 lengths between Stan and the horse in 2nd, Hoffenheim.

As they came into the stretch, Luzzi got Nicky moving. He put away Hoffenheim and came after Stan the Man. Nicky drew alongside Stan and actually took the lead… but Stan came back at him and regained the lead. They ran head and head towards the finish line. Then, Luzzi and Nicky dug in and inched ahead. As they crossed the finish line, we were a short neck ahead. They’d won! We’d won! Linda won! What a race!!

It was our first Graded Stakes win in the 13 years we’ve been racing horses. I was overcome with emotion. There were tears in my eyes. This was indeed The Ecstasy. Here are some photos: 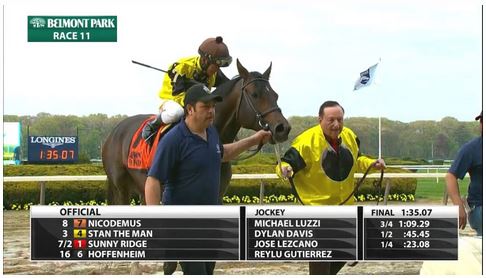 Whenever there’s an ecstasy, I’m always waiting for the other shoe to drop. It only took a few days. Shawn called because Ahvee’s Destiny had an abscess. We had to move her back from Three Ponds Farm because she was having problems with both front hooves. When he did his tests, he also found that left leg bone was losing density and would become brittle. On Tuesday night, it seemed like we might have to euthanize her.

This is horrible with any animal. Ahvee was our first horse. She was our 11-time winner, the queen of the stable. We know her for 13 years, She gives me and Rhoda kisses for food treats. She is eating well, bright and alert.

So, I think Dr. Morrell has devised a plan to try and save her… but I haven’t heard from him today. Tomorrow, we’re going to Saratoga. We’ll see her and kiss her and feed her. Hopefully, there will be some better news.

We’ll also see Candy for Kisses and her latest foal, a filly born April 26th. I believe there are some other mares there too.

We did a lot better at Belmont than at Churchill Downs. Heard some others had problems there too!