Pride in our first 4-legged grandchild! 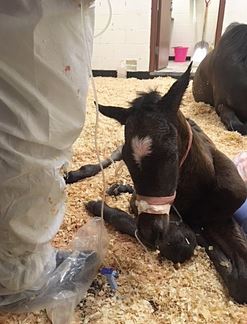 A bad week for newborn foals

We had just made a deal with a Assaf that included the foal that his mare, Soon-Soon, was carrying. Then it started on Tuesday night. He said Soon-Soon was having problems with delivery and might need the equivalent of a C-Section. We sent her to Cornell Veterinary Center, 2 1/2 hours form Assaf’s farm in Rochester.

They wanted to cut her, when the foal started coming naturally… but it was a red-bag delivery. The placenta detached from the mare and bled. The foal photographed nicely but she was in big trouble. 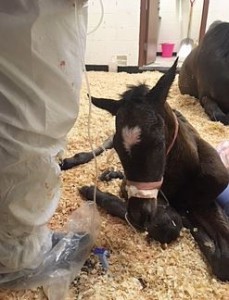 Wednesday started poorly, but when Thursday dawned, she was doing much better, surprising the Cornell staff. Thursday seemed like it was going to be a good day. However, as we were attending a dinner on Thursday night, I noticed that Bill from Stonegate Farm had sent me a text asking me to call ASAP. I knew there was a problem.Believe it or not, it was Assaf’s other mare, Song of Love, that was in distress. Not only was this another red-bag delivery, but this time, the umbilical cord had detached. Not only was the foal not getting oxygen, she was getting nothing and now, the pressure differential had the foal pumping her own blood back towards the mare. There was blood everywhere… except in the foal. The foal was gigantic, perhaps 130 lbs. He was beautiful but he was gone. At first, they thought the mare was bleeding out… but it was the foal’s blood.

To top this awful experience, the next morning Soon-Soon’s foal was going the wrong way. They tried to mechanically help her breathing but by Friday afternoon, she was gone too. Two foals dead in such a short time. Both mothers doing alright. We are traumatized.

Friday, Hay Field had a race at Aqueduct. It was another $25,000 claimer. Assaf said that nobody would want this crazy horse but before the race he knew that there were at least two trainers who were interested.

When the gate opened, Kendrick Carmouche got her out quickly, but took her to the outside to avoid getting dirt in her face. He kept her in great position and coming around the stretch turn, she was taking over the lead when the #1 horse, Lady Rullah, a 19-1 shot, came between horses like she was shot out of a cannon. Hay Field tried to stay with her but she was not able to do so. At the wire, Hay Field was 2 1/2 lengths back in 2nd place.

Four trainers had dropped claims for her. After “the shake” to decide whom would get her, Jeremiah Englehart was the winner and Hay Field went back to his barn. We were very sad to lose her. She was always a sweetie to us.

A week that started out with Daring Destiny‘s first win ended up on several down notes. It SUCKED! We are crying for our babies and for losing the horse we had since she was a yearling.