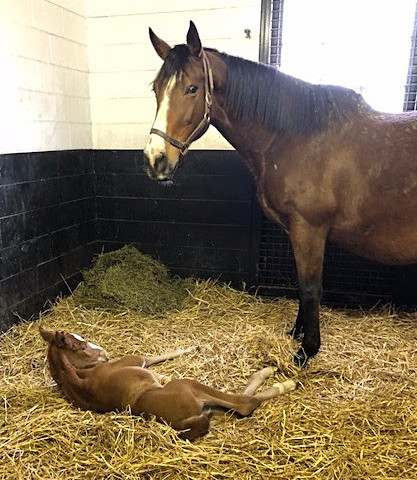 She’s the daughter of Tapiture, the sire and Yes It’s Barbara, the dam. Here she is about 15 hours after her birth on Monday, January 22nd… would have been my dad’s 96th birthday. Very glad that Barbara waited until 12:30 am on his birthday to foal this lovely chestnut filly. 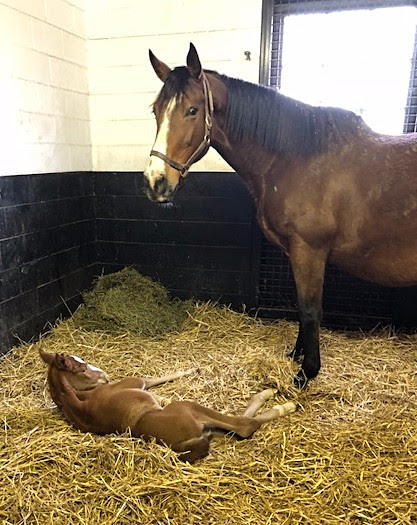 She was born at Watershed Equine in Lexington, KY.

We still have 7 mares (5 in Kentucky and 2 in New York) due to foal in February, March and April. A total of 10 to re-breed or breed for the first time, including Ahvee’s Destiny and FlatteryWillGetYou. Those two should be going to the breeding shed in February. Certainly, our most exciting breeding season.

Hay Field has been entered in a much tougher race at Aqueduct than the race she won by 8 1/4 lengths last month. Assaf says she really needs to race to dissipate her pent up energy. He feels she may surprise, even though the morning line has her as the long shot in a 6 horse race at 12-1. It’s post position 3 in race 7 at 6 furlongs with Kendrick Carmouche riding her once again. Go-o-o Hay Field!

Hot Possebility races from the dreaded 1 slot in the 9th race on Saturday with Junior Alvarado aboard. It’s only her second race. We’ll be there to root her on. It’s 6 furlongs at Aqueduct. Hope she can show something. Go-o-o HP!

Southern Union will be entered for a race scheduled for February 4th. More on that as the race gets closer.