News about our children 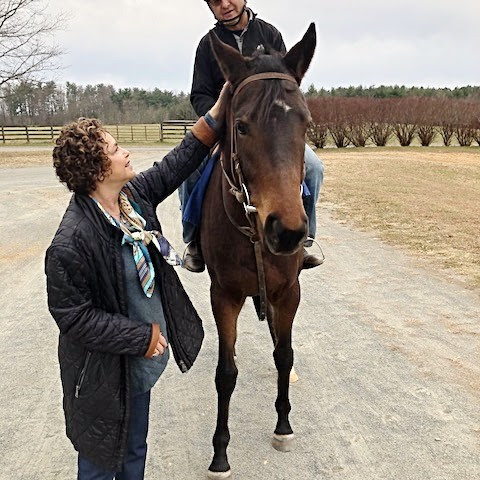 Rhoda and I were at a wedding in Atlantic Beach. We were sitting and talking with Rhoda’s extended family and sampling the food stations. I went to get some food. When I turned around, someone appeared to be fooling around with Rhoda. He had his arms around her from the back and seemed to be simulating a sexual encounter. Well, as all of you with clean minds have guessed, he was performing the Heimlich Maneuver on Rhoda. She had meat stuck in her throat.

In any event, by the time I got to the table, he had helped dislodge it. The excitement was over. Rhoda said she had been able to breathe through her nose. If it had been me, I wouldn’t have been able to eat anything else, but within minutes, she was enjoying another dish. Hooray for Rhoda!

One of the most interesting things was that this didn’t disrupt the wedding’s cocktail Hour at all. With all the noise from the music and people chatting, eating and drinking, not many took notice. And the successful outcome all took place in the blink of an eye.

After we got home and went to bed, the phone rang. It was Jonathan. We were concerned because he was supposed to leave for California in just a few hours.

He said he’d had an accident. He’d fallen asleep with Chicken Soup cooking on the stove. It burned down to the pot and spewed smoke and a film of soot everywhere. Everything in his apartment was infused with the smell of smoke. He was beside himself, but I was thankful.

In the blink of an eye, he was sleeping and his apartment had filled with smoke and soot. He was inhaling this dangerous mixture but woke up. How many stories have we all heard of people being severely impaired or even dying of smoke inhalation? He was alive and seemed to be suffering no physical ill effects. Boy, were we all lucky. He got to catch his flight, while Super-Rhoda took care of the apartment and his things. Another good outcome!

Yet, these events drove home that anything can happen in the blink of an eye. Then, I get in touch with Allen, a long-time good friend, who tells me, he’s not in his office. He’s in Burke Rehab after slipping on ice in front of his office. He dislocated his knee and BROKE HIS FEMUR IN TWO PLACES! Major surgery, lengthy rehab. Definitely NOT a good outcome. Hopefully, he will have a good outcome but it’s going to take three months, at least. Allen, I am praying for a full recovery for you each day. Work hard and get well.

I needed to write about these things. They are all very disconcerting. Maybe now, I can get to some horsie news.

There has not been a NYRA (New York Racing Association) horse race in 2018. The weather has caused cancellation of every race that was scheduled. Tomorrow will see the return of racing in NY. We will be in the 5th race tomorrow with a recent claim, Hold Me Down. She’s on the outside in post 8.

On Friday, Beyondelle will compete in the 2nd race from post 3. To me, she hasn’t shown much but Assaf still loves her. We’ll see. I am hoping that she proves my concern unfounded!

For Monday, Assaf wants to enter Southern Union. He feels he’s helped this horse get healthy and that we’ll see a big performance in another claiming race.

Our whirlwind trip to Virginia and Ocala last month was frenetic but fun. We arrived early in Charlottesville (that’s right, THAT Charlottesville) and drove to Crozet and Braeburn Farm. We met Patrick Nuesch, the owner and got to meet Raging Cat and Bossanova Boy, two yearlings who have since turned 2-years old on January 1st. To remind you, all racehorses become another year older each January 1st, no matter what their actual foaling date is. 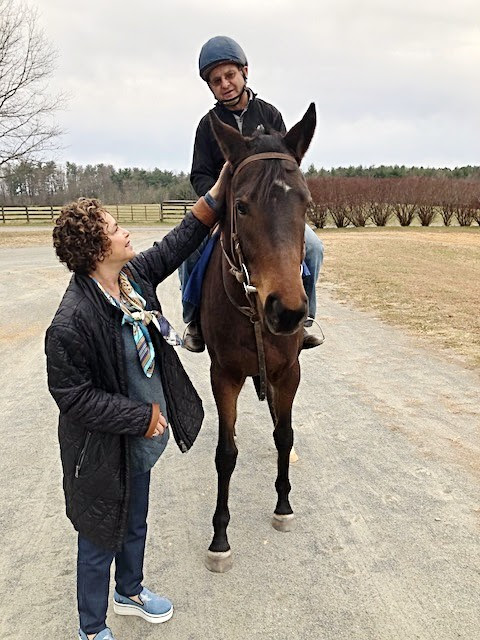 Rhoda and Raging Cat with Patrick aboard. 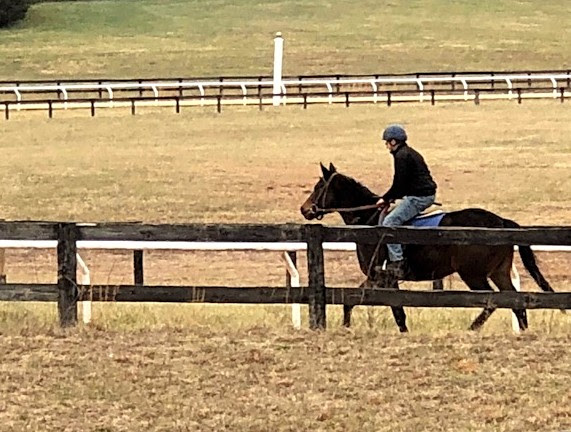 Patrick taking Raging Cat on a clockwise lap around the track. 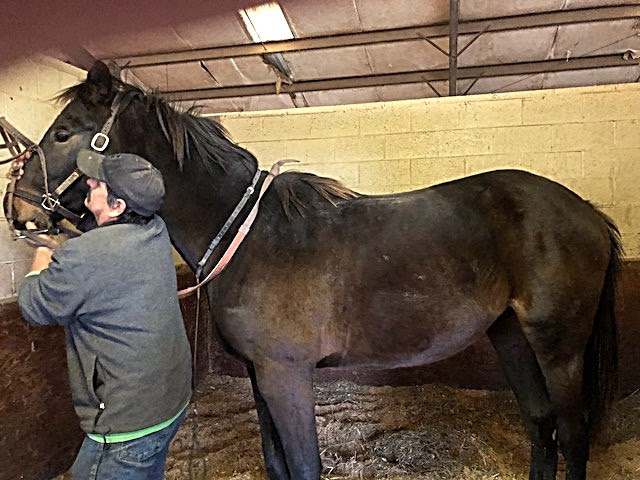 The groom getting Bossanova Boy ready for some exercise. 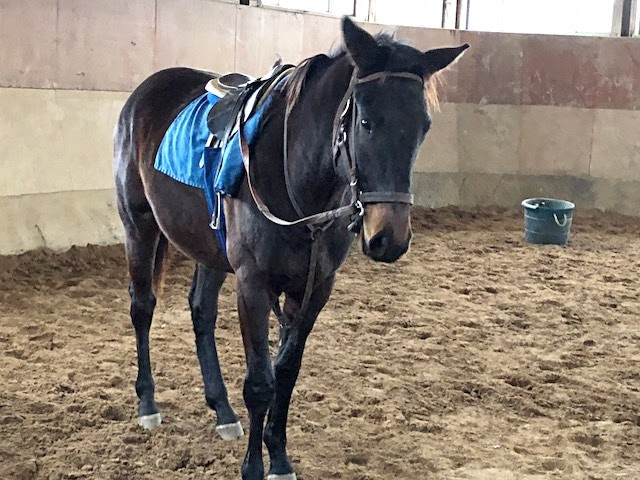 Afterwards, we checked in at the Boar’s Head Inn and got ready for dinner with Patrick, Spencer (whose farm we would visit the next morning and with Woodberry, who had recommended Spencer and had been a President of the Virginia Breeders Association.The next morning, we left in the darkness to get to Spencer’s farm, Sunny Dell before first light. We visited with our favorite foal, Love Code and our Kentucky bred, My Aunt Mims. 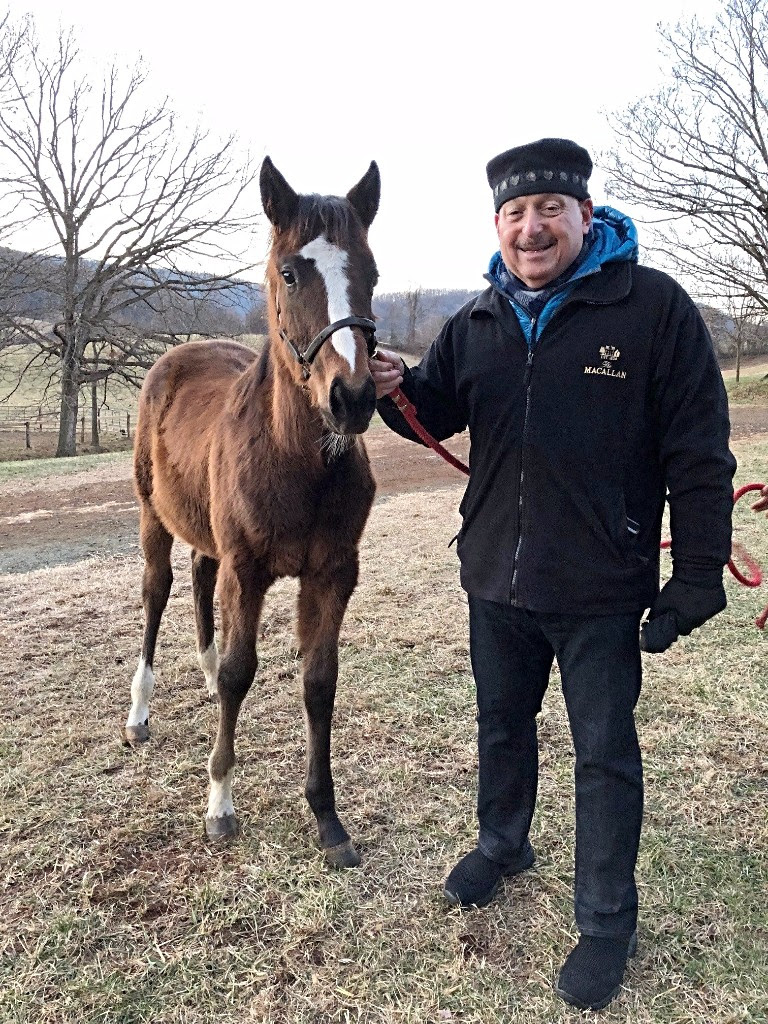 Here I am with Love Code. 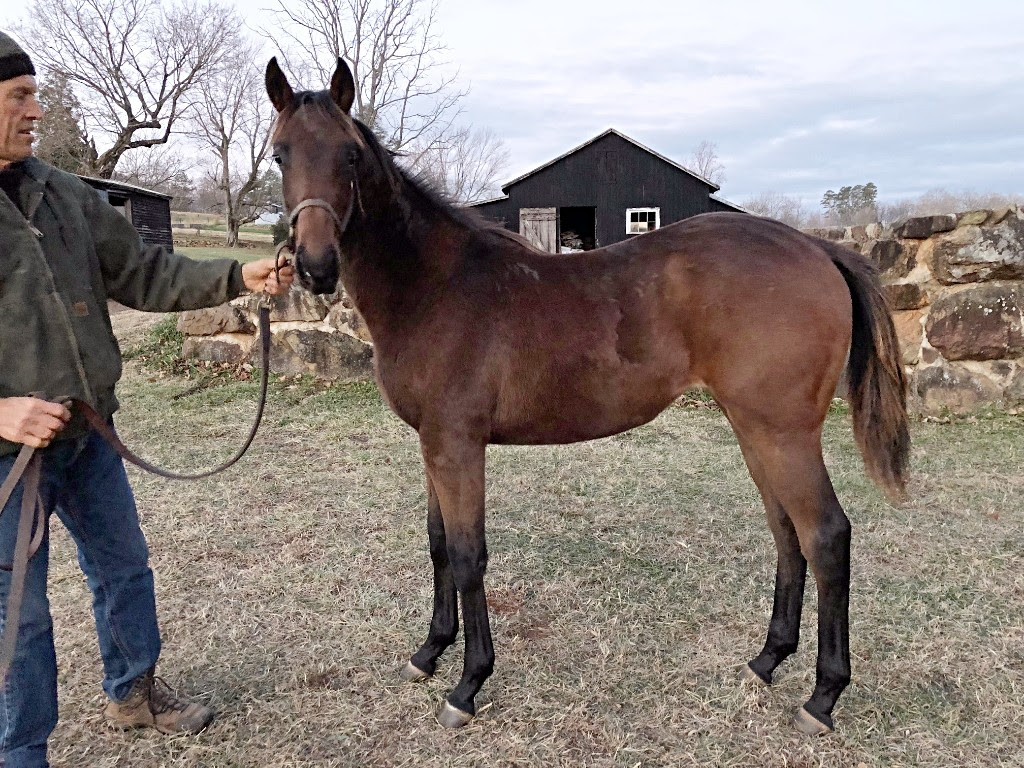 Spencer with Mimsy (My Aunt Mims).
We had to run to catch a flight in Richmond for Orlando. More or less an hour and a half plus returning the car and we were on our way to Orlando, where we got another car and went right to Pat’s farm in Anthony on the Ocala border. Aside from visiting the Hoppel family, we were seeing the now 3-year old, Aussie Ahvee and two about to become 2-year olds, Tzipi and Mo Joy. 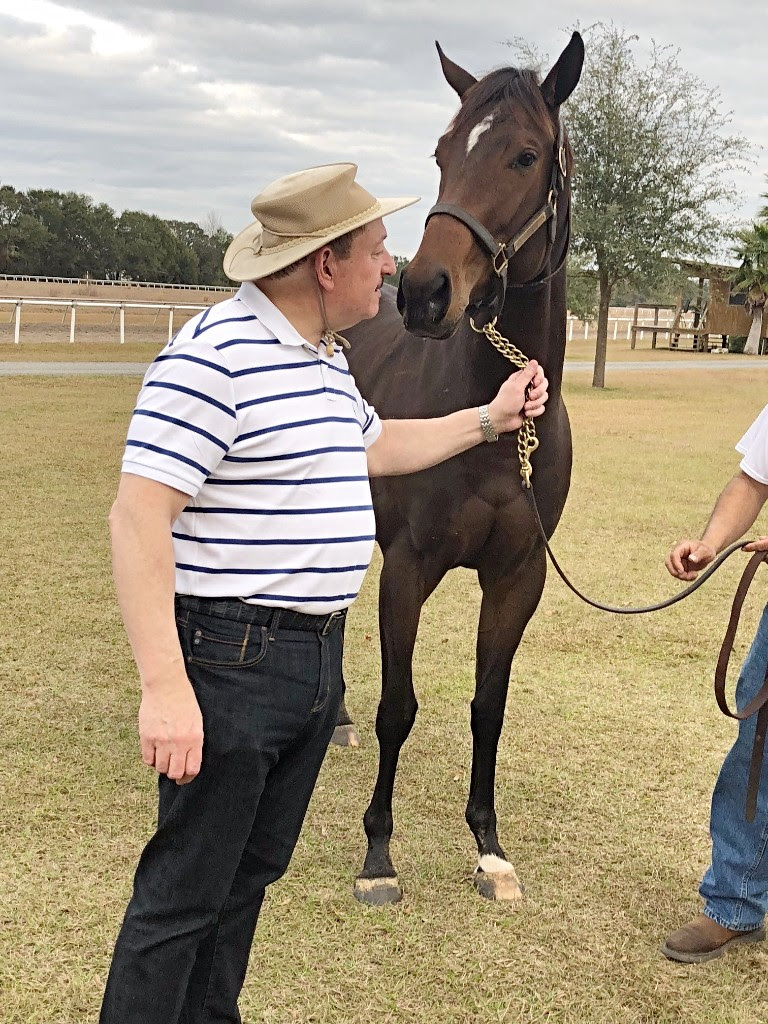 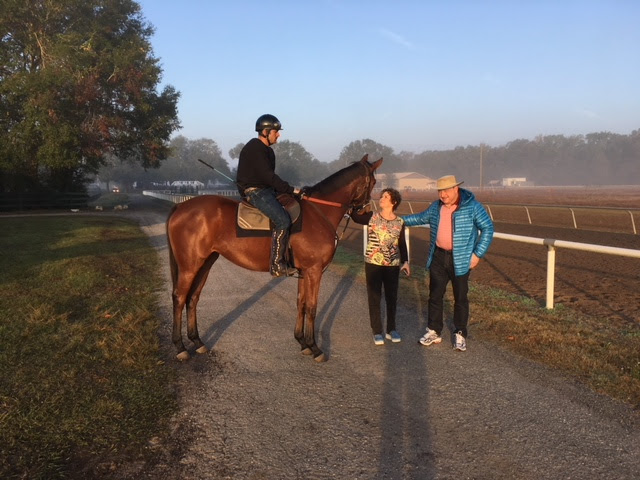 Rhoda’s dad called her Rho Joy. This is Mo Joy! 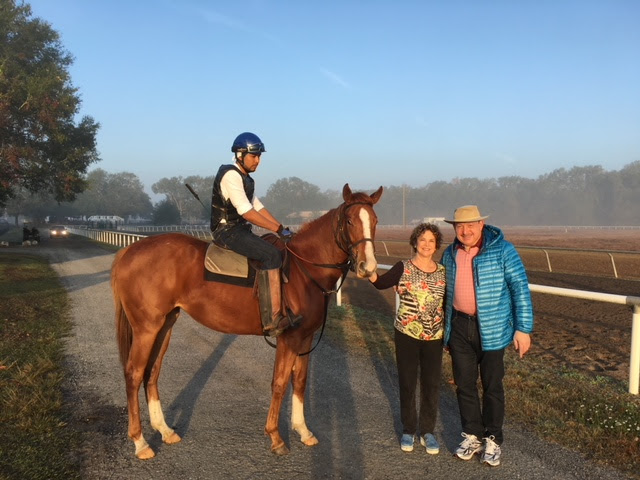 Tzipi’s sire is City Zip. My dam is Ziporah.
There are now four 2-year olds in our stable and three 3-year olds. We should see some action this year. We’ll report back after this weekend’s races.