It was cold in Pawling, NY

The advantage of Akindale is that it is in Pawling, only an hour away from Stamford, CT. The disadvantage is that it can be really cold.

Nonetheless, we went to visit Jess in his new home this very cold weekend. He seemed happy there with his new friends but he certainly was glad to see us (or at least our carrots and cookies!).Erin who runs the operation, brought him in to the barn. Here I am with this handsome horse: 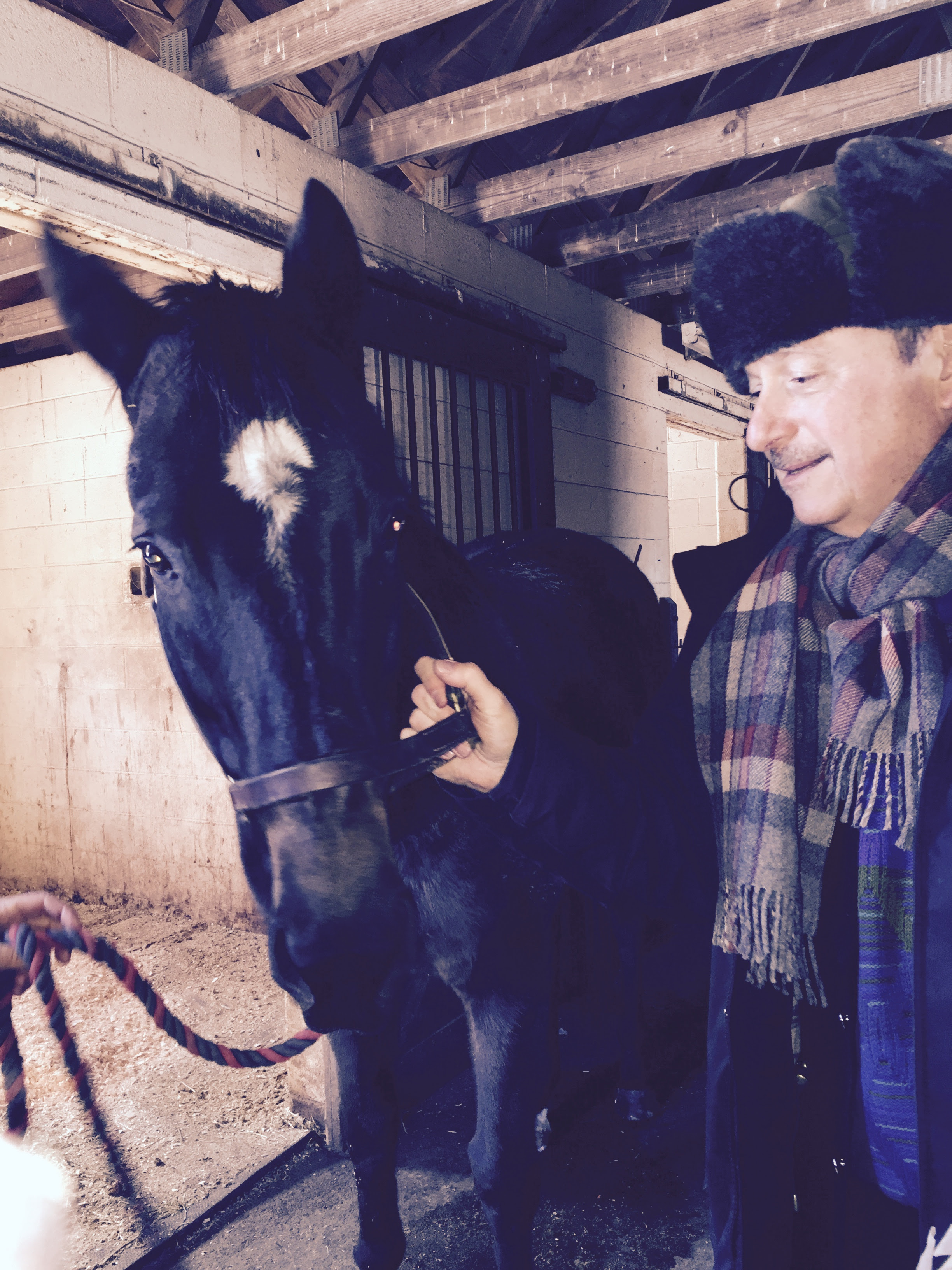 As I said, he devoured our treats. I thought he had learned this from Ahvee’s Destiny in Schuylerville but they weren’t together in a corral. Erin confirmed what a good boy he is. He’s really mellowed. In fact, though he wanted treats, he didn’t bite down when my thumb ended up in his mouth.

Erin is great. She loves the horses and they love her.We’re lucky that Jess is not far away. Of course, we hope someone adopts him, so he can be part of a family.Akindale is a 501 (c) 3, which means that donations are tax deductible. Please send checks to me. They take care of over 150 horses.

It’s a been a long while since I’ve sent a horsie report. None of the horses are running now, since the oldest horses in our stable have just become two year olds. I’ll introduce you to them in the next few days. Today I want to report on the recent events in the entertainment world.

First off, you may remember that I offered to buy all the drinks for anyone who attended the performances of Arielle and Jonathan’s band, Hints that took place Saturday night,January 3rd at the Triad Stage on West 72ndStreet in NYC. I am happy to report that no one took me up on that offer. Everyone has been enjoying Confessions and Alibis, the new album that Hints introduced that night. It’s fabulous. You can get it online or from me.

As usual, Arielle opened the show singing and playing guitar with Daniel A. Weiss on Keyboard. She was in great voice and her patter on stage was so natural, it was as if she has been doing this professionally for years..Congrats, Arielle, you were wonderful!

Hints then rocked the house for two hours. They sounded great live and when you listen to the album, you will hear a work of love and passion put together by Jonathan and the team of professionals he enlisted. It also cost a pretty penny to produce this album and I’m sure that Jonathan knows that it was worth every cent… and he paid for it all. I’m glad that he was so passionate about his music and, frankly, it shows. Listen to this album and any professional would enlist Jonathan’s help on their next album. Jonathan, you did an incredible job writing all the words and music yourself and with your band mates. It is a work to be proud of and we are certainly proud.

Yes, my friends, you see a father’s pride in both his children. If you know me well, you know I wouldn’t be saying it, if I did not believe it.

Speaking of projects I’m excited about, we’re funding the Gloria and Emelio Estefan musical, On Your Feet now. If you’d like to see the paperwork, let me know ASAP. It is scheduled to open in Chicago in June and on Broadway October 5th for its first prevue.

More to come as we introduce the new names for the newly turned two-year olds. Plus, we’re hoping to visit Ahvee’s Destiny, whose foal is due next month, next weekend. She’s been having trouble with her feet. So, we worry about her.

To all, HAPPY HEALTHY NEW YEAR!