Question: Which is the more handsome horse shown in the two photos?

Question: Which is the more handsome horse shown in the two photos? 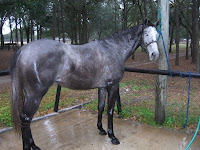 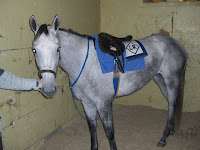 Both are photos of Holy Blitzer and they are very different. She’s changed a lot since we saw her last December.

She arrived 10 days ago and has had her first breeze, going 37.29 for 3 furlongs and Hear the Footsteps also breezed, going 36.6 for 3 furlongs. Hopefully, they’ll both be ready to race soon.

Ahvee’s Destiny is down in Florida but her feet are still sore. Linda is not worried but I am. It’s the first persistent problem she’s had. She’s our star and our first baby. GET WELL AHVEE’S DESTINY! We’ve had her leg joints and her hooves X-rayed and we’re waiting for a Vet’s report.

Arielle’s Song is also in Florida. She is a Florida bred and will probably try to race down there in January. Katy’s Office Girl is not having surgery (yet). The Vet in Florida did not see a chip. So, we’re putting her back in training and will watch her reaction. Hopefully, she will not show any soreness but if she does, they’ll “scope” her joints. Conseated Lady should be going back into training soon too. I’m hoping we can visit all the horsies down there, if one of them races this winter.

The two yearlings are doing well, according to Pat. The Midas Eyes colt is a good student. The Yes It’s True colt is very aggressive. I’m sure he’ll have both doing well. I’m anxious to hear whether he thinks either is very special. If not, they’ll be sold at auction in April (or at least we’ll try!).

Apparently, Rachel Alexandra, the Super filly, who won the Kentucky Oaks by 20 lengths and then won the Preakness, Haskell and the Woodward Stakes against the boys, is going to be in New Orleans during January. We won her owner’s (Jess Jackson of Kendall-Jackson wineries) auction to benefit the V-Foundation for the chance to visit with her. The other Super filly, Zenyatta, who has won every race in which she’s competed and just beat the boys in the $5 Million Breeder’s Cup Classic, may be some people’s choice for Horse of the Year but Rachel raced at 8 different racetracks in different conditions to accomplish many more wins this year than Zenyatta and Zenyatta has only raced on synthetic tracks. So, my vote (I don’t have and official one) is for Rachel Alexandra as Horse of the Year.