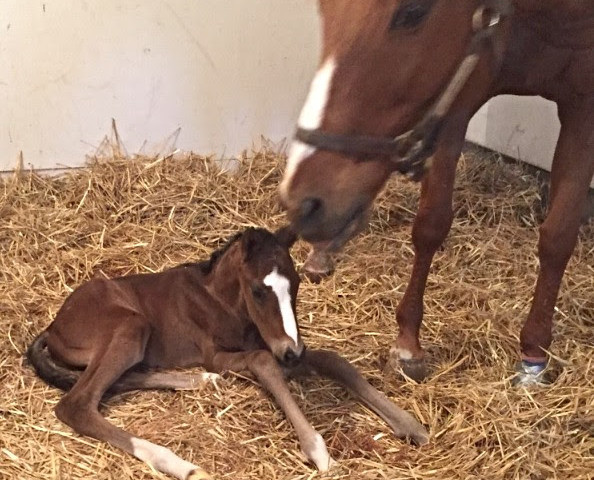 FINALLY… it’s a colt for Ahvee’s Destiny and Honor Code! 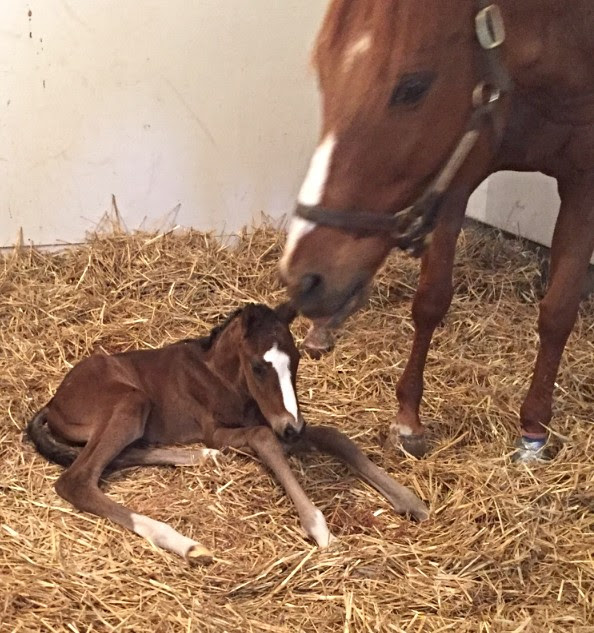 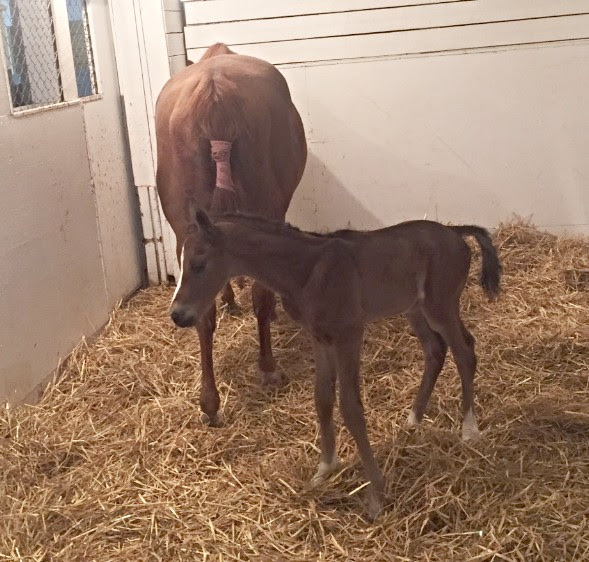 Ahvee’s Destiny had a rough pregnancy. Her foal had a tough time too. Mom’s placenta detached, turning the birth into a “red bag” delivery. Usually, the bag is white but when it detaches from the mare, it gets bloody and turns red. It became an emergency delivery and Dr. Bilinski attached chains to the foal to pull him out quickly, every second counted!

The foal was lethargic. Dr. Bilinski gave him oxygen, an injection of an anti-inflammatory and fed him colostrum (found in mother’s milk) through a tube. His heart had a murmur, its rate of beating was slow and he was physically small. This resulted from a combination of the placenta detachment which may have compromised nutrition transfer and because of the pain meds given her mom because of her hoof problems. Thanks to Dr. Bilinski’s quick actions, the foal is doing well and the doctor believes it is very likely the heart murmur will disappear as he gets older.

We are going to skip breeding Ahvee’s Destiny this year and aim to do so next February. The time off will be good for her hooves and will put her on an earlier breeding schedule for next year. We love you, big girl (or should I say, Big Momma)! We’ll be there in a few days with hugs, kisses, carrots and cookies (2 out of 4 ain’t bad!).

Candy for Kisses was unable to retain her pregnancy. She was bred for the third time yesterday. Let’s hope the time is the charm!

Assaf Ronen, the Israeli trainer who took over Hay Field, fell in love with a 2-yr. old filly named Beyondelle (beyond Arielle?) at this week’s Ocala sale, so we helped him get her. She’ll run in our silks. She’s a Florida bred. So, she was less expensive than a NY bred. Of course, she doesn’t qualify for any of the races restricted to NY breds. Maybe we’ll get to see her run in Saratoga this summer!

May 6th is the Kentucky Derby. Because of the size of the field, usually 20 contenders, this is the best betting race of the year. This year there is no overwhelming favorite, making it wide open. Good luck to all!