Our love & thanks to Ahvee’s Destiny! 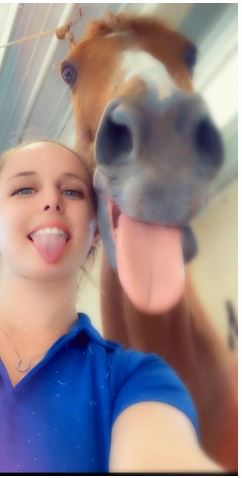 SHE STILL MADE US LAUGH!

But this was no laughing matter. Last Wednesday we came to Saratoga to see our first horse, our champion, our friend, a member of our family, Ahvee’s Destiny, for the last time. We fed her carrots and cookies. In the photo above, she had just eaten a cookie with cream inside that Sam, an employee at Rood & Riddle Equine Hospital who cared for her, had given her to consume. Then Sam took this selfie of the two of them sticking their tongues out.

Dr. Shawn Morrell worked very hard to save her over the last year. Unfortunately, she, he, and we all lost our battle. Her coffin bone was deteriorating and sinking. Nothing more could be done to get her healthy again and she would have suffered before succumbing. So, we fed her treats, kissed her over and over again, stroked her beautiful skin and said our goodbyes. Then, Dr. Morrell saw to it that she was euthanized and died peacefully later that day.

This from the last series of photos we took of Ahvee’s Destiny with us and Dr. Morrell.

Ahvee’s Destiny was 15 years old, she had won 11 times, including 4 Stakes and 5 times at Saratoga. She had 5 foals. Her 3rd foal, Tzipi, was scheduled to run on last Friday but rain on Thursday forced her race off the grass and she was scratched.Since 2007, we don’t know a Saratoga without Ahvee’s Destiny. We are empty, hurt and dazed. Who will nicker at us? Who will kiss us? Who will we love like we have loved her? Lucas, our guide in Africa, always repeated a phrase, “And life goes on.” He’s right, of course. But it changes. Sometimes, like this time, not for the better. Goodbye, our dear friend. We will always love you in our hearts and we will miss you so-o-o very much!

So, our oldest horse is gone. Later that same day, we had to authorize euthanizing our youngest horse, the 2019 foal of Candy for Kisses, who was born on April 26th.She was a beautiful foal who contracted Rhodococcus, a severe equine pneumonia in Kentucky. What a bad day!

Yes, Life Goes On. Here I am with Tzipi, trying to get a new source of kisses from my four-legged granddaughter. 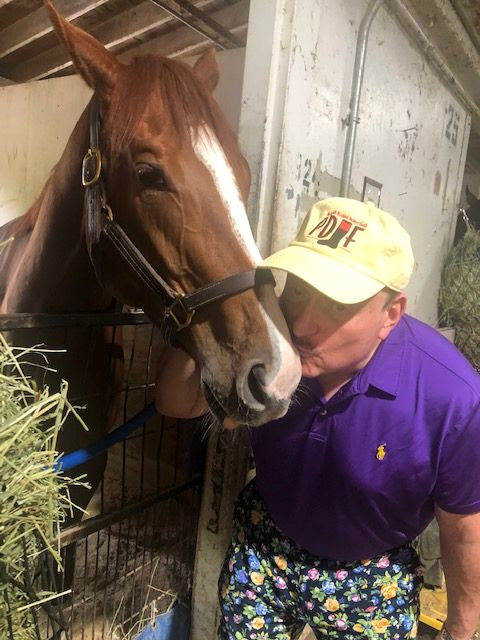 She’s very sweet. She broke her maiden at Aqueduct but bled. We’ll see if she continues her recovery, when she next races. It would be nice if she could assume her mother’s mantel at Saratoga.

I hope you’ll pardon me for finishing here. We await nuclear scan reports on Nicodemus, who had to be vanned off in his last race. Alphalfa awaits a race entry and Madita, a German filly in which we have a half-interest, will hopefully make her way to Saratoga next month. Hope your July has been a lot better than mine!