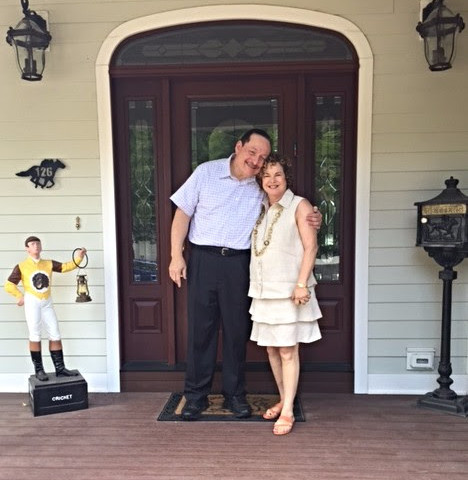 Here’s the first thing you see when visiting us… 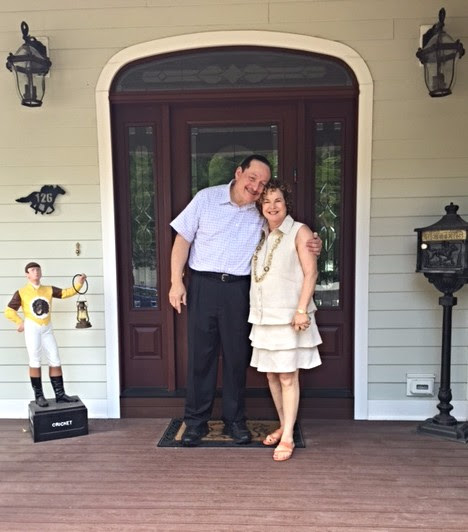 Looks a little corny, but we like it!
And then there’s Jose… 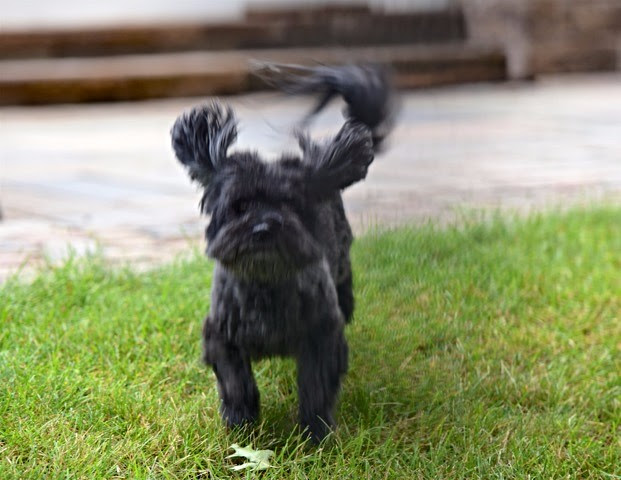 He’s here to greet you too!

On the racing front, only Another Genius, the horse we had little hope would work out, is left to possibly start at Saratoga. Hard-to-believe but true.

However, our 3 weeks here has been packed with visitors and adventures. We’ve traveled 40 miles north of Utica to visit old family friends and only 1/2 hour away to visit the Saratoga Warhorse, Jesse not Jesse, in Ballston Spa, as well as going to Albany for a Yanni concert. (Yes, Yanni lives!).

We got a golf cart and are now tooling around the barn areas on both the main Saratoga track and our backyard, the Oklahoma training track.

We’ve been to many charity fundraisers, attended the induction ceremonies of friends to the Racing Hall of Fame and the Joe Hirsch Media Roll of Honor and seen another friend star in Saratoga Shakespeare’s production of Cyrano de Bergerac.

And, of course, we’ve seen top racers and rooted for friends’ horses at Saratoga Race Course. We watched the powers that be cancel racing when flooding ruined the race track and attended a surprise party that really turned into a surprise when the power failed and it continued by candlelight.

We often take visitors to the Saratoga monument and for the first time, we visited the Schuyler House, where Liza Schuyler Hamilton used to go in the summertime as a child. We’re also planning to see the U.S. Grant cottage, where the former President completed his memoirs only days before his death.

Of course, the best part has been the visits of friends and family and our annual brunch, which this year honored our 10 year relationship with our trainer, Linda Rice. We got to see our daughters and grandsons for more than a week (still too short) and had many days when the No Vacancy sign was lit.

Today is Tisha B’Av, a Jewish fast day which commemorates the destruction of both Temples in Jerusalem which took place many centuries apart. We went to hear a reading at the Chabad House which traditionally takes place the evening that the fast begins. Instead of a service, the Rabbi played the reading on You Tube and we were the only other people present. While he meant well, it was quite a surprise!

We have had a chance to see Ahvee’s Destiny and her foal, as well as Candy for Kisses several times. I have become a food source for Ahvee and Candy for Kisses doesn’t care that we’re there… yet. We’ll keep trying to get her to interact with us. The foal is not interested in eating our treats but she does interact. She’s very cute.

Hope to have more racing news next time. Hope you’re having a great summer!