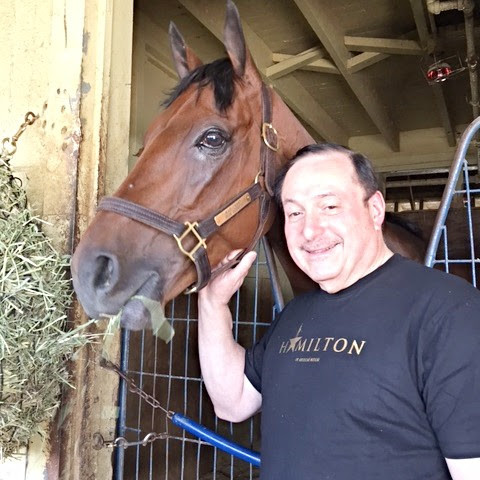 We claimed him yesterday!

I’m wearing my Father’s Day gift from Arielle and Tamar, a T-shirt from the award winning musical, Hamilton. Our Caravan wouldn’t eat any of our cookies but he’s munching on the hay ball hanging to his right. He finished second in the first race and we had to win a 5-way shake to get him (that means four others also “dropped a tag” [filed a claim slip] and our pill [ball] got chosen from the bottle. So, the big 5-yr. old gelding is ours. That was his 18th race. He’s won 4 times, placed 4 times and come in 3rd twice, while earning almost $340,000.
In any case, he should run in Saratoga and, hopefully…. WIN!

By Wednesday, we’ll know if Ahvee’s Destiny is still in foal. If so, she will be eligible for Prospective Foal insurance and we’ll cover her to protect our investment in her “No Guarantee” season to the sire, Honor Code. Usually, the breeding is done with a requirement that the foal “Stands and Nurses” after being born. We have no such guarantee. So, that’s what the insurance will provide. In fact, it will cover the foal for 30 days from birth.

FlatteryWillGetYou was very sweet yesterday and ate many cookies. However, her knee has been acting up. I asked her if she was comfortable. Flattery said, “I make a living!” (An appropriate joke for Father’s Day, since my dad always used that answer!)

We hope she will feel better soon or she may have to skip the Victory Ride Stakes on July 9th. More to come!