Ransom Note looked great in the paddock and on the racetrack. As Marsha, Linda’s current Assistant Trainer said, he looked very calm because he probably didn’t know what was going on. It was his first race. He was about to learn.

He was in post position number 4. When the bell rang, he was a little slow getting out and he got bumped by the number 3 horse. Then, he had was pinched between horses and Junior Alvarado had to take up and check him. He probably lost 5 lengths and the roughhousing must have startled him.

Once Junior got him going again, he tried to run as fast as he could. He was a handful for Junior to get under control. Finally, he did. However, for a while he seemed to take Junior’s tug to mean to slow down and he lost ground. Finally, Junior got him to start running again and he began passing horses and finished fourth. Not a bad result for such a rough trip in his first outing. 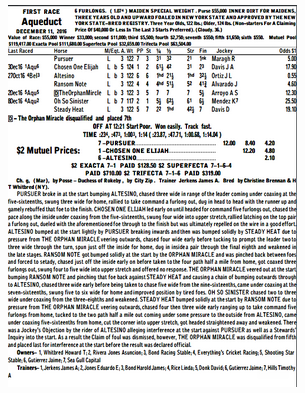 Next race on Thursday at Aqueduct, FlatteryWillGetYou returns to action. Jose Ortiz returns as her pilot, since Cornelio moved his tack to Florida. It’s the 7th race at 6 furlongs on the dirt. She’s lucky 7 (we hope!). Does she still have it? We’ll soon find out.