A Few Words About Theater… 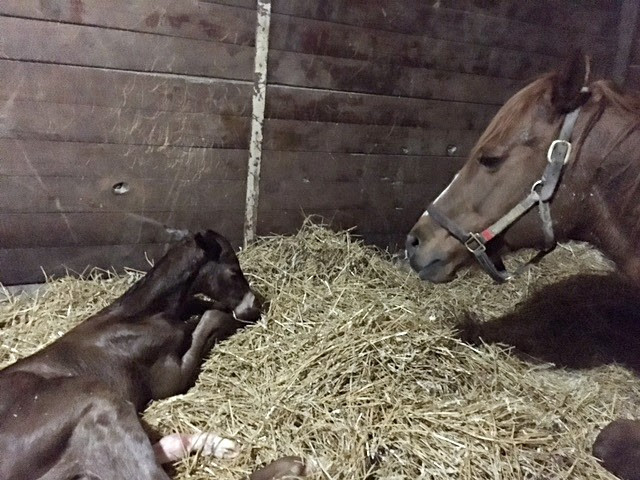 Ahvee’s Destiny’s stablemate and BFF is Karakorum Elektra. They used to race against each other and they both earned a fair amount of money.

Over the past few years, they’ve been staying at the same farms near Saratoga Springs and in Kentucky when they’ve been paired with Kentucky based stallions. Even though they both have A-type personalities and Elektra likes to bite Ahvee, they adore each other.

One day when they were in the stable together, they got frantic when we started taking Ahvee back to the corral. They were nickering and braying to stay in contact. Ahvee’s Destiny ran back and forth in the corral. She was filled with anxiety until Elektra was brought out to join her. Then, they nuzzled each other, ran around together and settled in. It was amazing. True friendship. So, much so, that Ahvee seems to be copying Elektra.

Sunday night (probably officially Monday morning), Elektra gave birth to a City Zip colt. According my calculations, Ahvee’s Destiny had conceived a week later than Elektra.. but no! She couldn’t wait. If Elektra was giving birth, Ahvee wanted to wait no longer. So, Monday night, she delivered a beautiful filly! 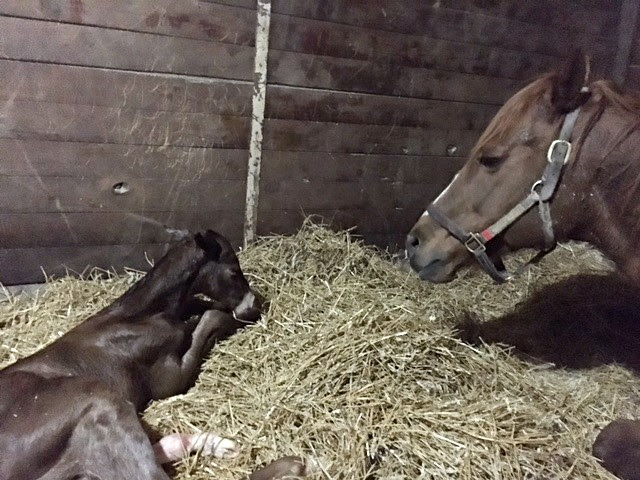 Just after birth, she is wet from the sack and being licked clean by Mom! 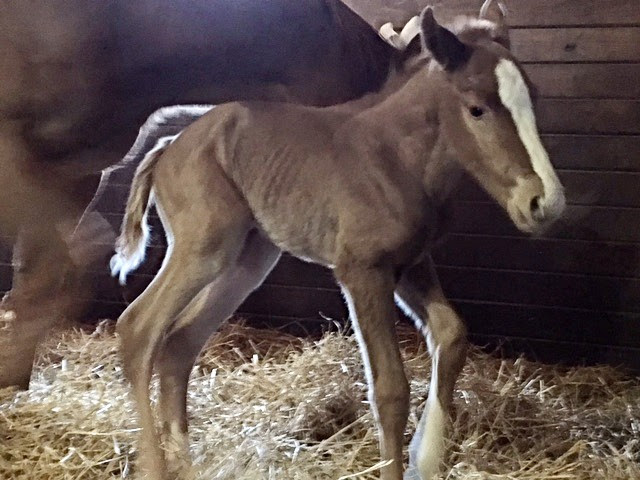 Look at all that chrome on her face! 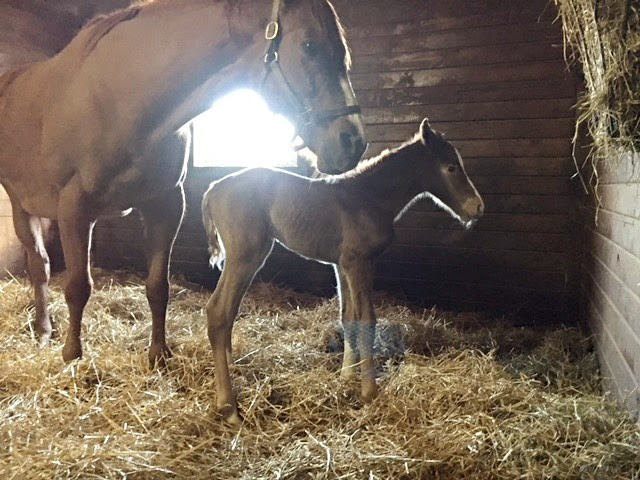 Doting Mom is in charge.
We’re trying to arrange a visit… especially since they’ll be going to Kentucky soon to meet Ahvee’s next mate, Eclipse Award Winning champion, Honor Code.

Here’s a run-down on the rest of the crew:

FlatteryWillGetYou has put on some muscle and Linda is looking for an allowance race for her in Maryland. Out two-time winner needs to run faster to compete at higher levels in New York. We don’t want to put her in a claiming race, if it can be avoided. We don’t want to lose her because we believe in her future. Let’s hope she lives up to our beliefs (really our desires, because who knows if she’ll do better. What did Tug McGraw, the former NY Met, say, “You Gotta Believe!”).

Ransom Note was ready to race when he spiked a high fever which turned out to be pneumonia. He’s being treated at the Ruffian Clinic at Belmont and will than go for an 8-week recovery period to Dr. Patti Hogan’s in NJ.

Hayfield is still tough to train. Hopefully, she will get better and race soon.

Candy for Kisses has developed into a nice looking filly. She just arrived at Belmont within the last week. Now we must see if she has developed any speed. She may be aimed for the grass.

Another Genius is still in Florida. She hasn’t come around yet but Pat says he hopes she’ll be coming up soon.

I’m not sure what is happening with Pointe Class. She’s supposed to breeze by now. Hopefully, I’ll hear something good from Carl soon.

Ramon Dominguez, the horse, is still a tough customer but a good mover. Ahvee’s destiny’s first-born is now a 2-yr. old. Hope he can make it to Saratoga this summer.

Aussie Ahvee, Ramon‘s half-sister, is doing well. She’s just a yearling. So, no thoughts of racing until next year.

Hope to have more to write soon. Congratulations to Linda Rice, Sheila Rosenblum, Iris Smith and other partners on their recent wins. Matt King Coal will be running in the Wood Memorial on April 9th to try and qualify for the Kentucky Derby. Good luck!

Also kudos to Linda and Sheila for their upcoming awards for La Verdad at the New York Breeder’s awards on April 4th.