Will Our Horse Forgive Me?

Another Genius racing Saturday at the Big A

Will Our Horse Forgive Me? 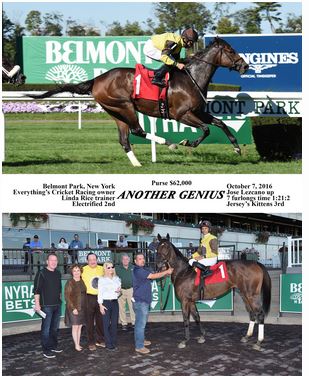 Will Another Genius forgive me?

It’s Yom Kippur, the Day of Atonement, starting on Tuesday night and ending 25 hours later. I’ll be walking to the synagogue and I won’t be eating or drinking until the holy day is over. I’ll be in synagogue praying most of the day.

I asked for forgiveness from friends and relatives in my annual message and am asking my immediate family personally. No doubt, I have done something to offend to many without even trying. Why am I worried about Another Genius?

She was a beautiful weanling when we bought her three years ago. When she arrived at Pat & Tori Hoppel’s farm in Ocala, Tori wanted to be the one to ride her most days because she loved the way she moved. It was a nice start.

Then, I had her genetically tested. She scored very low. Her behavior on the training track was difficult. She wanted to bite the other horses who trained with her, while they were both running! She seemed to be a head-case.

When I wrote to you last, I mentioned some of this… how I put her in a sale in Florida and nobody would bid enough to reach her reserve price. I was annoyed that I asked Pat to lower the reserve because t had already been a tough sale and I was disappointed when he didn’t and she didn’t sell.

She seemed so fragile when she arrived in Saratoga to train that the Linda was talking about sending her to a lesser track or putting her in a claiming race. She was even bleeding internally from the stress of training. Then Samantha and Linda tried her on the turf. She looked good. Soon, she stopped bleeding.

Then Linda entered her in a turf race in Saratoga and, you remember, she predicted victory for the first time in our ten years together. Indeed, Another Genius came from behind and won!

Candy for Kisses was the first horse we owned in ten years to win her first outing on June 26th. Another Genius became the second to win at first asking on August 22nd.

Unfortunately, Candy had to be retired because of a bad knee and underlying bone. So, she didn’t get a chance to win her first two races. Genius was given that chance on Friday.Rhoda and I were both nervous on the way to Belmont. It was a beautiful day to be outdoors in October… unlike today. Genius was looking nervous and Linda looked concerned. She wasn’t guaranteeing a Genius victory today.

We followed the horses out of the paddock and Linda found a box for us all. We were sorry that Jim couldn’t make it but another of Linda’s owner’s (and now our friend), Aron, joined us.

Another Genius was in the first post and had to stand in the gate until all the other 9 horses were led into the gate. Then, they were all in. The bell rang and the gates opened.

Another Genius seemed to start in the middle of the pack but Jose Lezcano, riding her for the first time, sent her up along the rail to the front. In only a moment, the favorite, Esther the Queen, (we were second favorite) took the lead. The early fractions appeared very fast. We followed Esther closely around the turn. Then, we appeared to fall back. I was afraid we were fading.

We were still racing nearest the rail. As they completed the turn, Genius appeared to be getting closer but I thought it was just her shorter path next to the rail. However, when they straightened out, Genius switched leads (her right legs had been leading the left ones and now, she switched to her left legs leading her right, which can mean a little extra strength). Suddenly she was taking the lead. Then Jose tapped her a few times with his crop and she pulled away by a couple of lengths.

I lost track of the finish line  Suddenly she was passing it, in the lead by a length and a quarter. She had won again, the first time any of our horses had won their first two races!

You only get your picture taken when your horse wins. So, off to the Winner’s Cirlcle we went. Here is the win photo:

When Linda was finished with the 9th racer, we went back to her stable, visited with Another Genius and the newly arrived Hay Field. Of course, though I fed her some hay and asked for her forgiveness, Genius ate some of the hay but made me promise to send my apology publicly. So i have.

Thanks to you Genius, I learned that numbers are not foolproof and sometimes you have to give a horse enough time to mature and try the right surface. You seemed late getting to the racetrack… but I guess we’d have to say, it is the perfect time. Congratulations Another Genius, Linda Rice, Samantha Randazzo, Jose Vega and all the staff!